Brian Gillespie from Hasport called me, and told me that he and his son, Carter, wanted to run his swapped (of course) DA9 Integra at some track events this winter. Carter wants to work on his closed-course driving skills for track days and ‘time attack’ type events. This is a very positive step for newer drivers, as track time builds driving skills that will help out during the ‘daily grind’ on the street as well. Having good car control skills during accident avoidance situations can save a lot of property damage and possible injuries; there is no arguing those facts. And of course, tracking your swapped Integra can be a crazy-good fun too... 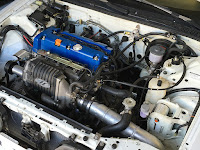 The Gillespie crew has ‘swapped in’ a K24 donor engine from a CRV, and added a JR supercharger that was a ‘spare’ in the Hasport parts bin. They fabbed up a new intake, and installed a larger radiator to help with track day abuse and those Phoenix afternoons in traffic. The power goal is a reliable 280-300 whp. Yeah, it’s good to be Brian’s kid! The five-speed gearbox has an LSD, and required a cable-to-hydro conversion as well. Thanks Hasport!

Carter has been working on his 1993 Integra three door (DA9), fixing the numerous worn and abused items that need attention on a twenty-some year old Acura. He has been driving it daily on a Progress CS2 coilover system with a softer ‘DD’ springs (350#/350#). They have also added a homegrown ‘splitter’ to help ‘pin’ the front end and add some stability at speed. For a track setup with an inexperienced driver, we suggested a stiffer 550/550 ‘square’ setup. These ‘square’ setups are predictable and forgiving for the newcomer, and are plenty fast when set up properly.

So we aired up the tires, a proceeded with a spring swap, bumping up to the 550/550 rates. While the front wheels were off, Brian demo’d his new ‘fender roller’ that bolts to the wheel hub and has a radius arm with a plastic roller that presses behind the fender lip. Very cool. So my tired ol’ Stickball bat may be retired soon.

We unhooked the rear sway bar, and got the car back on the floor, set the ride heights and started chasing the alignment settings. We measured camber and adjusted the front & rear toe, and checked the rear for symmetry using some 1” square aluminum tubing. We sighted down the tubing and checked for 'like' toe settings on the left & right. Well, we needed to do a little dialing-in to get the L&R sides matched up, but the result is worth the effort.

After dialing in camber and toe settings, we pushed the Teggy up on the chassis scales for some corner weighting. This is why we unhooked the rear swaybar end link, so it would not impact the corner-weighting process.

We set the cross-weights at 50%, as this is the best starting point for a track car. With the 50%/50% corner weights, have a best shot at ‘like’ handling for left and right corners. Predictability is our handling goal for a newer driver, as this builds confidence and lap times with minimal surprises. Carter & Brian can dial in a more neutral setup as Carter’s skills grow.

We opted to leave the Progress rear sway bar disconnected, until Carter was comfortable with the basic racing line at the course. Having no effective rear sway, Carter had predictable understeer, and zero surprises in the handling department, just what's needed for new drivers learning a new course. It's a quick fix to stop in the paddock and reattach the rear end link, and the sway bar is back in service. The rear sway will reduce body roll and move the chassis balance closer to 'neutral' for quicker turn-in and some faster laps.

Carter's first track event was busy, wrestling with mechanical gremlins including low boost & tuning issues, as well as swap-related details. Carter & Brian did get some of the 'new-build' issues sorted during the day, and had some good clean laps later in the event. Carter commented that the car was more stable than it had ever been before, and it was easier and waaay fun to drive. Just what you want to hear about a new suspension setup on a fresh project. To be continued...

Install that new Progress sway bar
So you’re ready to make some suspension improvements. You did your research, then bought a new sway bar. The brown truck dropped it off yesterday and there it sits, looking very pretty. Now the fun begins, let’s get it installed. 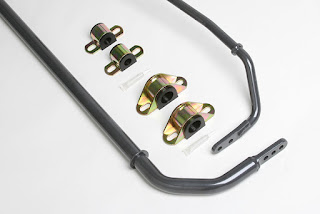 Should I install this myself?
Are you mechanically inclined? Do you service your own car? Do you have the right tools? If you are ready to install this, you probably already know it. You should have a trustworthy floor jack and two jack stands plus a basic assortment of metric hand tools and a ½” breaker bar for the lug nuts. A torque wrench is a real plus. Skills? Look over the install instructions, and see if you are comfortable with the task. If you don’t have a place to work on your car, or the right tools or skills, it’s time to find a friend, alignment shop or service facility to help you out.

Read the instructions first.
We wrote them. Please read them. And don’t just look at the pictures!

Find the sway bar on your car.
Jack up the chassis and support it with jack stands using the OEM jack points. Look in the owner’s manual if you need to find the jack points. Lie on the floor and find the sway bar. Look it over, and take a few pics of it with your phone. This way you can record the orientation if you need to check later. Don’t install the new sway bar upside down! I like to use a large scrap of corrugated cardboard under the car. It’s easy to slide around on, and keeps your shirt clean(er). 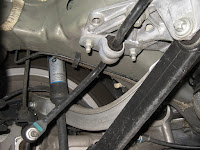 Remove the bar.
Remove the sway bar hardware, and remove the bar from the car. This may take some doing, and some bars are much easier to remove than others. Note exactly how you removed it, so you can install the replacement bar the same way.

Lube it correctly.
Lay out the bar and kit. Find the bushings and the little pack of special grease. Snap the new poly bushings on the new sway bar, noting the location of the OEM bushings and locating rings. Remove the poly bushings. Snip off the end of the pack, and squeeze a bit of the lube the bore (inside!) of the new bushings. Smear it around the ID, coating the entire inside bore. There is plenty of grease in the pack for two bushings. 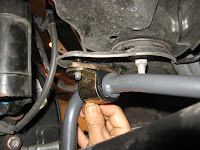 Tighten the hardware.
Really. The sway bar is under load from the suspension links when the vehicle is being driven. It sees constant load and vibration from the road, so the hardware must be tight or it will come loose. Check the instructions or look up the torque specs, and follow them! If you are not sure if the fasteners are tight, they probably aren’t. This is where a torque wrench comes in handy, so use it if you have one. We get some inquires about end links and bushing brackets coming loose. Why do they come loose? If the fasteners were not tightened securely, over time they will work loose and cause noise and possible failure. So get’em tight and it’ll be right.

Reinstall the wheels if you removed them, and set the vehicle back on the ground. Torque the lug nuts to the OEM specs using your ½” drive torque wrench and a cross-pattern for tightening. The torque setting will be listed in your owner's manual.

Test drive.
Now the fun part. After less than one mile of driving, you will notice that there is less body roll, and handling feels tighter with less roll. Hard to explain, but easy to feel. The chassis balance will be different, and more favorable. Less roll during cornering will inspire confidence rather than reservation about the uncomfortable ‘wishy washy’ body roll. The steering will feel more responsive, as instead of inducing roll, the nose will turn into the corner. The steering hasn’t changed, but the vehicle’s response to your inputs has improved. Enjoy your new driving experience; enhanced by Progress Tech.
Posted by Progressauto at 4:04 PM

Wouldn’t you like to go faster for free?
We have spent a lot of time over the last twenty years developing handling products and making suspension recommendations. Most of our suggestions and modifications require some sort of expense, some modest, some more substantial. Here are some often-overlooked and simple suggestions for some free speed... 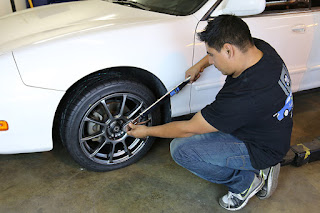 Inspect it.
Check your engine oil and coolant levels.
Torque the lug nuts. Add a tiny bit if anti-seize compound to the wheel studs before cross-torquing them. Check your tire pressures and while you are airing up, take a look at the tread and inside shoulder of the tires for excessive wear. Rotate your tires and put the best tread on the front axle. Rotate the tires front-to-rear only, and don’t switch sides.

Secure it.
Secure loose items and cargo. It’s no fun to turn into a quick corner to find loose stuff and baggage (your laptop!) zinging across the cabin.  Then you hit the brakes and your lunch or phone slides off the seat into the footwell. Take a few minutes and secure your baggage and loose items in the cabin, console, and trunk or cargo area. Use a box or grocery bin. And remember flip-flops are not racing shoes!

Practice daily.
We all think we’re pretty good drivers because we are enthusiasts. But most of us make a lot of mistakes. Most of us commute and drive daily, so this is our ‘first’ chance to get some driving practice. Set the seat position for alert and safe driving. Adjust the mirrors. Be aware of your hand position on the wheel (both hands!). Be aware of your surroundings by staying alert and scanning around. Avoid distractions, and be ready for the unexpected.

Feel the set.
When you turn into a long sweeping corner, feel the car roll a bit and ‘take a set’ during corner entry. The 'set' is that 'steady state' of traction that is established on initial 'turn-in'. If you hold a steady line, the car stays 'set' and planted. If you over-drive and correct too much, the car needs to re-set and this compromises the grip or traction because it redirects a lot of mass (you entire car). This takes time and ruins your steady line. Learn to hold a steady line through the corner, and then make a 'precise' transition from one corner to the next. Do your braking before corner entry, and accelerate after the ‘apex’ or middle of the corner. If you feel for the 'set' then 'transition' to the next corner, you will quickly learn why 'the line' through the corners is so important. 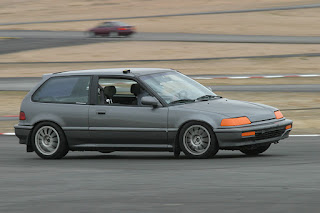 Be smooth.
It’s a great help to practice being ‘smooth’ with all the driver inputs; steering, throttle, brakes and shifting. Consider that ‘smooth’ driver inputs mean less vehicle speed is ‘wasted’ redirecting the car over and over. Smooth is fast. The best drivers are always smooth and make it look so easy!
Posted by Progressauto at 3:51 PM